So here is the promised post detailing our holiday food. For Christmas dinner our menu was: Roasted Venison back strap with mushroom gravy; rice with cranberries and walnuts, roasted butternut squash, and sautéed green beans with caramelized onions. 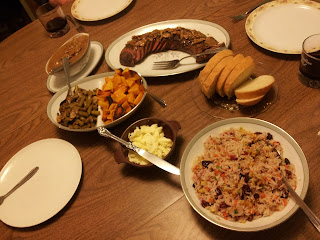 The venison was a gift and we were really excited about cooking it, as Tim loves venison and I hadn’t had it before. Turns out the venison shot in our area is amazing. It is grain fed because we are surrounded by wheat fields, and if I hadn’t known it was venison I would have thought we were having beef tenderloin, it was that mild and tender. We got the recipe from a website that I am now regularly referring to: Hunter Angler GardenerCook. He has a lot of amazing recipes and information for using wild game and foraged foods.


For the rice I checked out a few recipes and then combined them into what I wanted. I sautéed the white part of 3 green onions, thinly sliced, in some oil and butter. I added a little carrots and celery, also finely sliced. Once the vegetables started to soften I threw in a cup of basmati rice and let that start to toast. Once the rice was toasty I added 1 ½ cups of chicken stock, two sprigs of fresh thyme, and ½ cup of fresh cranberries. I brought that to a simmer, lowered the heat and covered the pan. 15 minutes later the liquid was absorbed so I took out the thyme sprigs and stirred in ¼ cup of dried cranberries, ¼ cup of walnuts and the green tops from the green onions. The rice had a faintly purple hue, it was sweet, tart, nutty and very delicious. I will definitely be making rice like this again.


For the green beans, I wanted the flavors of green bean casserole without a big, gloopy casserole so I caramelized half a yellow onion, thinly sliced, threw in some thinly sliced mushrooms and some fresh green beans and sautéed it all together until the vegetables were cooked through. Finish it with a little butter and it was perfect. Honestly, the squash was mostly to use up some extra butternut squash I had. I peeled it, cubed it, tossed it with olive oil and salt and roasted it at 350 degrees until golden brown and delicious.


For Christmas day we went a little more traditional. We had spiral ham, mashed potatoes and gravy, sausage stuffing (or dressing, if you like, since it wasn’t actually stuffed inside anything), Brussels sprouts with bacon and cranberry sauce. 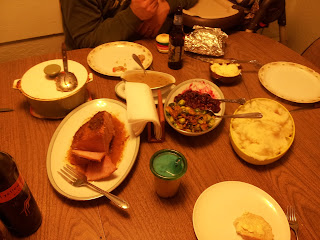 The ham was store bought, but for a glaze we did a riff on Alton Brown’s ham crust. We used honey, molasses, brandy, whole grain mustard, and some crumbled molasses cookies. (Alton’s original crust uses bourbon and ginger snaps, but I didn’t have either of those.) Cooked down a bit and brushed on the ham it created a glaze that was sweet and spicy and complemented the ham really well.


Even though we were doing a ham, both Tim and I wanted stuffing, so I cubed up half of a Tuscan style loaf of bread then sautéed some sausage with mirepoix (onion, carrots, celery) and fresh sage, then tossed it together with some chicken stock. We packed it into a casserole dish and baked it alongside the ham. It turned out very good, but next time I will remember to butter the inside of the casserole dish, the bread stuck pretty badly.


Brussel sprouts with bacon is easy and so delicious. Just trim the bottoms off of some sprouts, halve them, then dunk them in some boiling water for 2 minutes to blanch them. Drain them, then slice up several slices of good bacon. In a good sized skillet or cast iron pan cook the bacon. When the bacon pieces start to crisp, remove them with a slotted spoon so most of the fat remains. Toss in the blanched brussel sprouts and cook over high heat until the sprouts soften and start to char in spots. Remove, season with salt and pepper, and top with the bacon pieces. So yummy.


Finally my cranberry sauces wasn’t too inventive this year since I’m still missing most of my pantry. Whole fresh cranberries, zest and juice of an orange, brown sugar, a little cinnamon, and a pinch of salt.
Well, hopefully that gave you a feel for our holiday feasts. Not too shaby for our first Christmas alone, huh?
Posted by Unknown at 8:42 PM